Before, during and after reward redemption – three moments to leverage loyalty program success 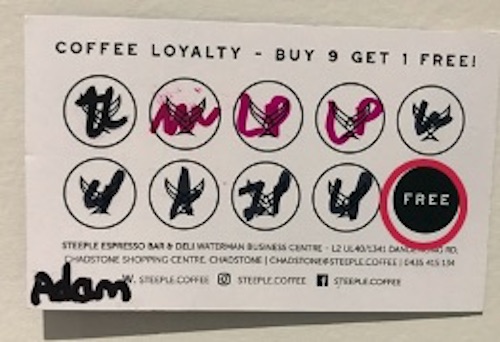 “The barista at my regular café stamps my card with each purchase. When I get to my freebie (which takes me 9 days @ 1/day) I do feel a sense of achievement. However, here’s the kicker… when he gives me my new card to start all over again (my mind says…oh well another 9 days to go), he surprises me with an extra stamp (and sometimes two) to get me going. Even with my brain saying “I know the psychology behind it”, I still get an emotional lift and feel the time to the next reward is now closer – and so the happy hamster wheel starts again!”

In this simple example there are three moments of program interaction and hence behaviour change, which are key to program success

For the first time in our ongoing For Love or MoneyTM 2020 loyalty research, we investigated the psychology of earning and redeeming rewards and whether members change their behaviour as they get closer to earning a reward and after redeeming a reward

The research identified the behaviours the closer members get to earning a reward, as:

49% of members identified their behaviour changes (spend more or purchase more often or both) the closer they get to earning a reward.

The change of behaviour (of members) the closer they get to a reward is based on the Goal Gradient Effect originally identified by behaviourist Clark Hull in 1934[1] and then re-evaluated by Ran Kivetz, Oleg Urminsky, and Yuhuang Zheng[2] who identified findings that:
1.  Participants in a real café reward program purchase coffee more frequently the closer they are to earning a free coffee;
2.  Internet users who rate songs in return for reward certificates visit the rating Web site more often, rate more songs per visit, and persist longer in the rating effort as they approach the reward goal;
3. The illusion of progress toward the goal induces purchase acceleration (e.g., customers who receive a 12-stamp coffee card with 2 pre-existing “bonus” stamps complete the 10 required purchases faster than customers who receive a “regular” 10-stamp card); and
4. A stronger tendency to accelerate toward the goal predicts greater retention and faster reengagement in the program.

So, what’s the point?

Your program interaction data will be able to identify all members who are close to a reward which gives you the power to:

Also, providing visible progress of proximity to reward achievement is important to stimulate a change of purchase behaviour.

Moments of redemption light up the brain

At redemption, whether the reward is expected or is a surprise, is digital or in-person (less so these days) the brain is stimulated.

Unexpected pleasant surprises are more impactful as the brain ‘gets a kick out of these surprises’ with a rush of dopamine – the brain’s feel good transmitter[3].

Every-time a member receives their reward – their brain lights up! This leads to a more emotional connection to the program even if the reward is transactional.

The research identified the behaviours of members after reward redemption, as:

So, what’s the point?

In summary, loyalty and rewards programs at their core are about rewarding members for behaviours (transaction or interaction).

Understanding the psychology of member behaviour before, during and after redemption provides program managers with the insight to make every one of these moments count for both the member’s delight and the program’s success.

Have a happy loyalty day

[1] The goal-gradient hypothesis, originally proposed by the behaviorist Clark Hull in 1932, states that the tendency to approach a goal increases with proximity to the goal. In a classic experiment that tests this hypothesis, Hull (1934) found that rats in a straight alley ran progressively faster as they proceeded from the starting box to the food.